The concept of population health is important, timely, and, though it’s a little complicated, can lead to tremendously positive outcomes for patients.

Population health refers to the strategies that look at an entire population and create pathways that impact everybody in that population. As doctors and nurses, we are used to dealing with the patient in front of us.  With population health, we still get to do that, but we are also asked to look at a larger group of people and make sure that everybody is taken care of.

That’s accomplished with teams; it’s not something any of us can do alone.

So, how do we get there? First, we use data to understand the population. Let’s imagine a group of 1,000 patients. We begin by assigning each one a score, based on factors like their conditions, their ages, and their medications. Once we have done that, we tailor interventions. One patient, given her illnesses, might require house calls. Another patient, given his conditions, might only require a phone call.  The important thing is that we are accountable and responsible for everybody.

Without population health, we run the risk of missing segments of the population, leading to fragmented care and areas of real inequality and disparity in terms of healthcare access. For example, somebody who lives on a bus line might get to the doctor more easily compared to someone who lives three blocks away. That situation ends up creating a different healthcare experience and it also means different outcomes for the patients. 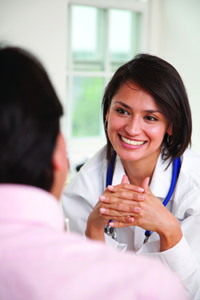 When we talk about population health, we aim to use data to get a picture of the entire population so that we can target approaches to accomplish our desired outcomes: avoid unnecessary hospitalizations, avoid unnecessary emergency room visits, and create patients who are happier and healthier.

What does a population health approach mean for Neighborhood? We have already been using data, but we are going to be less tolerant of silos. Behavioral health is one example. We cannot say, “OK, we are going to address your diabetes and your immunizations, but not your behavioral health needs.” We share our data, working together in teams of nurses, social workers, behavioralists, and community health workers.

It also means Neighborhood will continue its efforts in our local communities. We can empower the Community Health Centers and the local practices, encouraging them to create pathways that are integrated and that will allow them to avoid unnecessary disparities caused by the fragmentation of effort. Everyone will work together for their assigned population. And it’s not acceptable if you did a great job for ten patients but you did a bad job for ten other people who could have benefited.

We can see a day where care management teams here at Neighborhood configure themselves, for example, into teams which then become responsible for 500 or 1000 of our members. We will give those teams the tools and the data so they can decide what the right intervention is, but we will also hold them accountable.  At the end of the year, if we look at those 1000 members, we should see that they are healthier – and they have had a better healthcare experience – than they would have had without a population health approach.